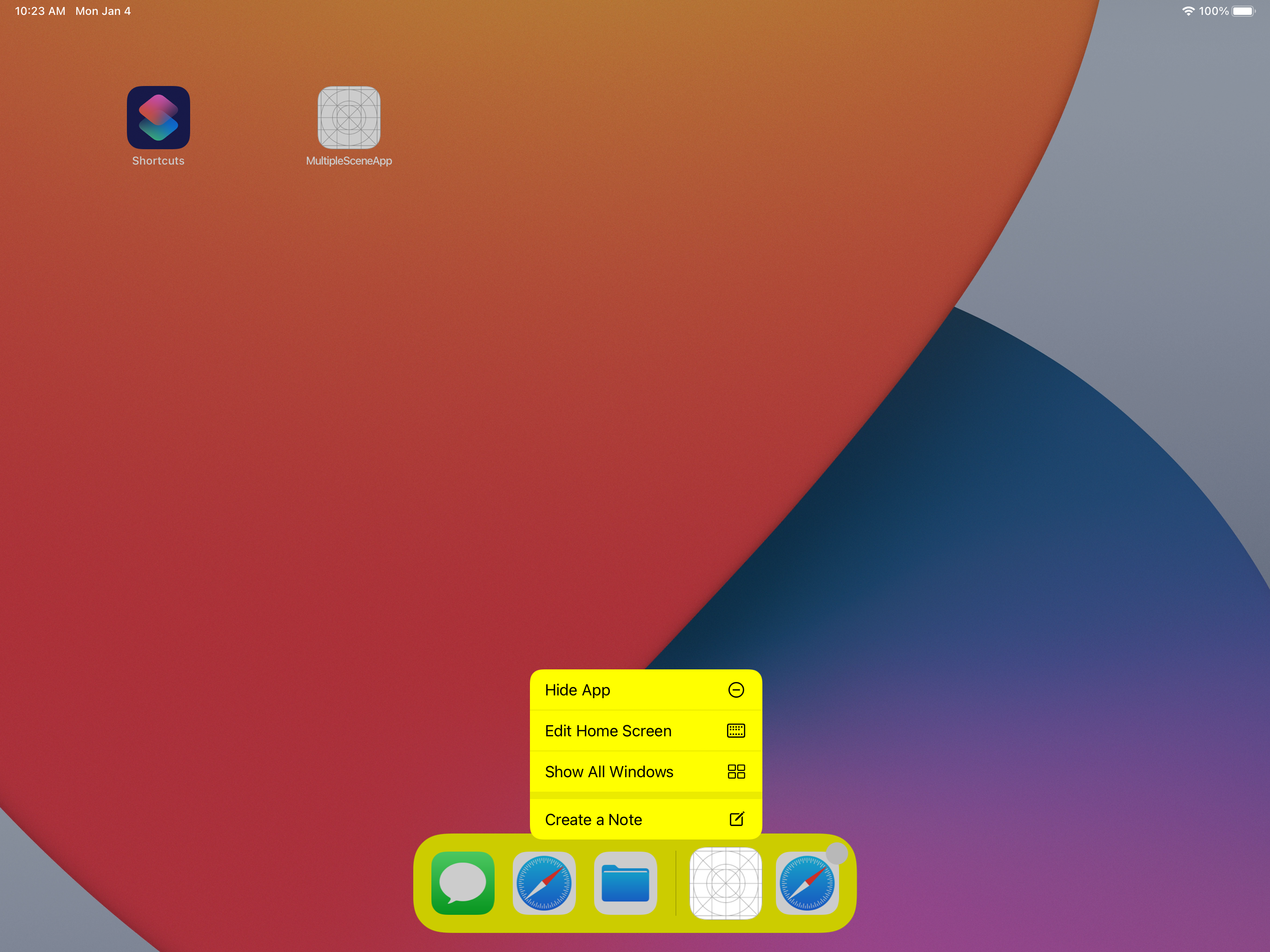 One of the most common features that I see in app reviews from customers of my client’s apps is the ability to add shortcuts to the home screen for frequent actions. For a gym app, the request could be a shortcut to bring up the barcode that the gym scans to check in the customer at the front desk. A business customer might want a shortcut to book a room at a hotel that the customer frequently stays at. These shortcuts are formally known as Home Screen quick actions and can be a great way to win customer favor by exposing common actions.

An example quick action is shown below:

Dynamic quick actions can be added at runtime by the application. Dynamic quick actions are created by creating a UIApplicationShortcutItem object and adding it to the UIApplication.shortcutItems property. Dynamic shortcut items are effective for scenarios where you want to provide more information. For example, a quick action for reading messages in an inbox may want to include the number of unread messages. A bank app or financial app may want to show a current balance for an account-specific activity.

As I mentioned, when SwiftUI 2 came out in June 2020, I dove into the first beta to take a look at the new application model. Since Home Screen quick actions are one of my frequent feature requests, it actually happened to be the first thing that I looked at, and immediately ran into a roadblock with.

Prior to iOS 13, quick actions were routed to the application delegate object using the UIApplicationDelegate.applciation(_:performActionFor:completionHandler:) function. In iOS 13, Apple introduced scenes into the applications and the quick action handler was moved from the UIApplicationDelegate protocol to the UIWindowSceneDelegate protocol using the windowScene(_:performActionFor:completionHandler:) function.

As it turns out, life as a SwiftUI developer is not as bleak as it may seem. Fortunately, it appears that the SwiftUI team thought about this a little (not enough apparently to document this; but they obviously thought about it). As it turns out, if you specify a custom UIApplication delegate using the UIApplicationDelegateAdaptor property wrapper, and in your custom application delegate class implement the application(_:configurationForConnecting:options:) function, you can provide a custom scene delegate and SwiftUI will use that for screen events.

I am going to start with a new iOS application using the new SwiftUI life cycle. Xcode will automatically generate me an App type that looks like this:

I will update this definition to associate a custom AppDelegate class that has not been created yet with the SwiftUI application:

My next step is to create the custom AppDelegate class and to customize the application(_:configurationForConnecting:options:) function to associate a custom scene delegate with my application’s scene:

I will create the MainSceneDelegate class and implement the scene(_:willConnectTo:options:) function and the windowScene(_:performActionFor:completionHandler:) function to handle the quick action:

I am using the static quick action definition that I showed earlier in my Info.plist file. I have to implement both scene(_:willConnectTo:options) and windowScene(_:performActionFor:completionHandler:) in the scene delegate. The scene(_:willConnectTo:options:) function will be called if the application is not running and I will need to handle the shortcut when the scene is created and connected to the scene session. If the application is running and the scene is connected to the session, then iOS will invoke the windowScene(_:performActionFor:completionHandler:) function to handle the quick action.

In the delegate functions, I am checking the type value for the shortcut item. If the type matches what I am expecting, then I am initiating a navigation to a handler that can handle the quick action. Notice that my custom scene delegate can reference the openURL environment property. openURL acts as a bridge allowing me to execute actions in SwiftUI from my UIKit code. I have not seen another way to get access to the SwiftUI views when using the WindowGroup to create the scene, so openURL seems like the only way unless I want to create the UI myself in the scene delegate. It appears that if I do not create the UI myself, then the WindowGroup will create its UI, but I can still safely customize the session connection event in the scene delegate.

I will update my ContentView view type to handle the URL that I passed to openURL. For the time being, I will only display an alert to validate that the application has successfully received and routed the quick action.

Here is what the application looks like when using the quick action:

The Problem with Multiple Scenes

If you read post on multiple scenes with SwiftUI 2, there is one little trap that you will probably run into which I have not been able to solve yet. In my post, I talk about how target content identifiers can be used to route events to the correct scene. If you look at the UIApplicationShortcutItem class, you’ll see that it also has a target content identifier field.

The problem that I have run into with shortcut items is that I have not figured out how to set the target content identifier property for a quick action. For dynamic quick actions, you cannot set the property directly since it only publicly exposes a getter. For static quick actions, I have tried using the UIApplicationShortcutItemTargetContentIdentifier key in the dictionary and that does not appear to work either. So at this point, I have no idea of how to route the quick action to the correct scene.

The behavior that I have observed is that the quick action will route to whichever scene was most recently active. Therefore, if you are building an application that has multiple scenes and also implements quick actions, you will need to implement support for the quick actions in all of your scene delegates. You might want to consider using a common base class.

I have an open feedback request with Apple about this issue and will publish an update if I ever get a response.

Michael F. Collins, III
Michael Collins is a software developer with 27 years of professional software development experience. Michael is a Technical Client Director in the Digital Platforms practice at Neudesic, and proudly serves the Desert Mountain region (Arizona, Nevada, and Colorado) from our office in Tempe, Arizona. Michael is very passionnate about software development and loves creating custom applications for himself and his customers. When not developing software, Michael is an avid Disney fan, enjoys reading, baking, cooking, Legos, and learning new things. Michael lives in Surprise, Arizona, with his wife and three children.
Next article
Creating Multiple Scenes in a SwiftUI App
Next article
Introducing Naked Blogging
iOSSwiftUIHome ScreenQuick Action